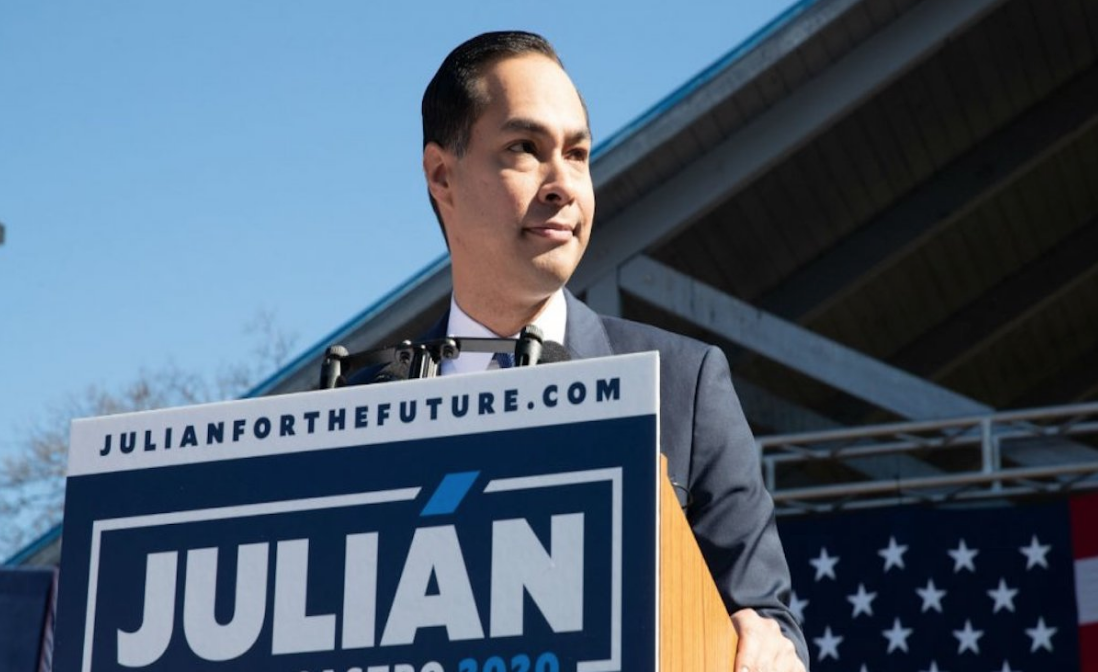 Julián Castro and the Democrats’ Catastrophic Accent (and Immigration) Problem

The first thing I noticed while watching Julián Castro announce his presidential bid in his hometown of sunny San Antonio last Saturday were the accents. Dozens of accents packed into historic Guadalupe plaza were placed exactly where they were supposed to be: on top of the “a” of all the blue placards proclaiming the arrival of “Julián.” My inner militant language geek raised his left fist in celebration.

proud to be supporting such an outstanding individual from my hometown #Julian2020 @JulianCastro pic.twitter.com/xNp7ogytL9

For the United States, those accents are historic, if only because they likely represent the first Spanish diacritical marks on the name of any serious Latino or non-Latino candidate in U.S. history. But for many of the more than 55 million Latinos in the United States, that accent means much more. It says, “es nuestro momento,” this is our moment and we will not be denied.

I thought about how my many friends in San Antonio must’ve felt, including friends who introduced me Castro when he was mayor. I also thought of the disturbing facts about “good” and “bad” Latinos I discovered while cruising down Military Drive in the Alamo City in the Bush era.

To my surprise, Castro’s linguistic clarity also included delivering a better-than-expected speech. The sometimes wonkish (and overly stuffed-shirted) Democratic candidate delivered a speech with cadences that were nothing for him or any of us to be ashamed of.

Beyond the performance, the content of his speech included some policy proposals that are anathema to the corporate wing of the Democratic Party many of Castro’s allies hail from: Medicare for All, Universal Pre-K education and other issues forced into the political debate by the growing left (Sanders and Ocasio-Cortez) flank of the party.

When he said, “I won’t be accepting a dime of PAC money in this campaign,” I smiled.

But then Castro made the catastrophic mistake of talking about immigration.

As I listened to him utter those fateful words about caged children, images of all those brown people holding blue placards were swept aside. My brown eyes started overflowing with tears before the memory of Daniel, a beautiful caramel-colored six-year-old boy imprisoned in a purposely-isolated south Texas facility with his mother and two older siblings. Their crime: trying to exercise their right to asylum from the catastrophe of the Salvadoran gangs who shot Daniel’s uncle in the face, right in front of him.

Daniel connects me to Castro’s speech in unique ways. I met the boy and his mother while visiting the Karnes County Residential Center, a hulking, overcrowded —and deadly— facility located just 50 miles south of Guadalupe Plaza. Without blinking, Daniel, his two immigrant siblings and mother put an accent on the “o” as they described conditions in the detention center they called a “prisión.” His mom described for me conditions so abominable that “boys tried to hang themselves” and “women slit their wrists” to escape the prisión.

Weeks after I left them, Daniel and his mother joined the other women and children who, in their utter desperation, organized a hunger strike that included holding up signs on which the kids painted the word “Libertad.” Internal Department of Homeland Security memos later revealed that Daniel, his siblings and mother, and all the other organizers of the hunger strike were isolated and punished for what the Administration at the time called “insurrection.”

Castro’s speech reminded me of the conditions I witnessed among the more than 500 other women and children imprisoned at Karnes, some locked up for over a year or 50 weeks after the six weeks psychiatrists attending Daniel and other kids told me the younger kids’ tender brains start shrinking from too much incarceration. Before, during and since my visit to Karnes, I’ve cried regularly due to the fact that Daniel and his family’s story are but a tiny sliver of the more colossal immigration catastrophe I saw unfold in south Texas and across the US over more than a decade of presidential elections, long before Central American refugees became a liberal causa célebre of millions last summer.

Here are just a few examples:

I also don’t recall a single comment on any of these immigration catastrophe stories from either Castro, his fellow Texan Robert (I will not call him “Beto”) O’Rourke, Joe Biden or any of the other 2020 Democratic candidates either. I scanned public comments and could not find an acknowledgement from any of the leading Democratic party candidates for president of a single one of these incidents that took place before January 20, 2018, but all have commented since —with Castro even delivering teddy bears and toys to jailed refugee kids— describing during the high profile action last June, how “frightening” it was for him to know that “thousands of children” were imprisoned by Trump.

Castro’s comments about there being “no way in hell that caging babies is a smart or humane” either refer to both Trump and Obama, or the former HUD Secretary is playing linguistic games,  drawing convenient lines in the sand of immigration catastrophe. If that is what Castro is, in fact, doing, his nice words on immigration will carry the same weight as those candidate Obama delivered at the 2008 National Council of La Raza conference to crowd of teary, brown-eyed Latinos desperate for an end to the immigration catastrophe left by George W. Bush:

“When communities are terrorized by ICE immigration raids,” Obama said back then, “when nursing mothers are torn from their babies, when children come home from school to find their parents missing, when people are detained without access to legal counsel. When all that’s happening, the system just isn’t working.”

After delivering the stirring speech and becoming president, Obama went on to break records for the number of migrants and babies terrorized by ICE immigration raids and other devastating policies, including the deportation of a record-smashing almost 3 million (all made possible by what can only be called the enabling amnesia and silence of many Latinos) and many Democrats. Accounting for past abuses fuels #BlackLivesMatter & the #MeToo movement. We can’t afford the efforts of some Democrats to put up a border wall to the abuses of the recent immigrant past. Migrant lives matter too.

I noted this accent problem early on, as early as 2008. The linguistic giveaway also came in the form of presidential campaign placards. Obama’s placards bore a curious message: Si Se Puede!

Some noted that there was an accent missing above the “i” in “”Si” on many placards. But hardly anyone noted or commented on the fact that, without that accent, “Si Se Puede” means something like “Maybe We Can or Maybe We Can’t” or “If We Can.”  In the end and in terms of stopping the immigration catastrophe left by Bush, Obama’s Spanish accent problem proved even worse than Bush’s contributions to the even longer continuum of immigration catastrophe that runs from Bill Clinton in 1996 to Donald Trump in 2019.

If we are ever stop the relentless growth of this deadly continuum, Castro and all other Democratic candidates for president will have to exercise not just linguistic and rhetorical clarity by putting accents where they belong. They will also have to exercise greater moral and political clarity, the kind of clarity that tears down the blurry borders putting political party before immigrant people.

Roberto Lovato is a writer and journalist based at the San Francisco Writers’ Grotto. He recently wrote “Politics pushes Central American voices out of child separation coverage” for the Columbia Journalism Review. He tweets from @robvato.