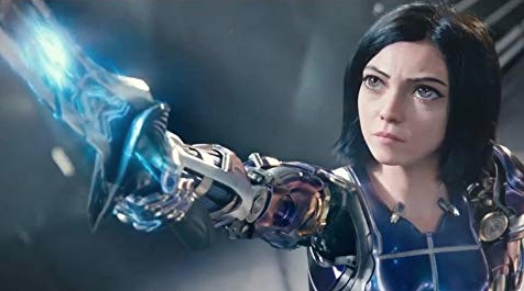 Most sci-fi films focus time and attention to building new worlds for us to experience. From Georges Méliès 1902 Trip to the Moon through Robert Rodriguez’s Alita: Battle Angel  today, filmmakers have used their cinematographic storytelling skills to build new worlds for us to inhabit. To different degrees, however, such sci-fi storyworlds have either erased or exoticized Latinxs—and people of color generally. Take Ridley Scott’s world-building in

the utterly mind-blowing Blade Runner (1982). Its slow, magisterial sweep and camera push-in gave us the time to absorb and relish this vanguard vision of a future-set L.A. (November 2019, actually). Scott’s exquisite crafting of a total vision of an earthbound future-set world continues to marvel.

The impulse to reduce Asian (and cultures of the Other generally) to exotic ornament is not new, nor the exclusive domain of sci-fi. The late Edward Said threw this in the spotlight when he carefully excavated 19th-century European literature, travelogues, and scholarship that crystallized into an ideology of appropriation and oppression. European systems of writing and “knowing” Asia spun an Us vs. Them Manichean allegory: Europeans as good and civilized vs. Asians as evil and uncivilized. This system known as “orientalism” helped bolster and justify real, barbarous European colonial and empire building practices in the Middle East and Asia. Threaded through this Us vs. Them orientalist ideology appeared various iterations of the beneficent paternalist and white savior attitude. The upshot: the spinning of propaganda as knowledge that sanctified cultural appropriation and obliteration of racialized Others.

Orientalism is the backbone to mainstream sci-fi flicks, and not just in the world building strategies already identified with Blade Runner. It’s prevalent, too, in casting choices. Think Anglo-Brit actor Tilda Swinton cast as the Tibetan mystic (in the comic book), The Ancient One, in Scott Derrickson’s Dr. Strange (2016). Think Anglo-US actor Scarlet Johansson cast as Major (Asian cyborg supersoldier in the comic book) in Rupert Sanders’ Ghost in the Shell (2017). We are seeing more sci-fi characters played by actors of color, including Latinxs. However, they continue to be relegated to secondary or even tertiary roles in plots, often appearing for just enough time to throw a dash of spice and color into the storyworld.

This is the contextual backdrop needed to understand the significance of Latinxs in Robert Rodriguez’s sci-fi world building of Alita. Robert’s always been about putting Latinxs in front of the film camera. As he mentioned to me in an interview for The Cinema of Robert Rodriguez, his dedication to and prodigious output quickly grew a Latinx star system—within and outside the Hollywood system. Even as recent as the 1990s, he reminds us that there were no Latinxs working in Hollywood—a very conservative and “reactive business” (141).  Latinxs like Danny Trejo, Benicio del Toro, Rosario Dawson, Jessica Alba, Alexis Bledel, Michelle Rodriguez, Demi Lovato, and Rosa Bianca Salazar are the drivers of plots. They are the figures audiences engage with. From Desperado and Spy Kids to Machete, Planet Terror to today’s Alita, Robert builds worlds that feature Latinxs as more than a spiced-up, exotic ornament. They are the complexly rendered agents of the action. Latinxs are the saviors of community, the planet—the universe.

With Alita Robert does this—and more. He builds his sci-fi world in and through all facets of Latinx life and culture as it reaches across an Américas in time and space. Robert’s make-over of Yukito Kishiro’s runaway bestselling cyberpunk manga Gunnm (1990-1995) relocates the temporal-spatial setting from the US to a hemispheric Américas. When building out the massive set for Iron City (60,000 square feet of Trouble Maker Studios lot in Austin), Robert and his set designers studied carefully the built spaces of Mexico’s San Miguel de Allende, Cuba’s Havana, and Panama’s Panama City.

In each case, they were especially attentive to the way architecture in the Américas is a palimpsest of pre-colonial, colonial, and postcolonial histories. Where, for instance, pre-Colombian designs co-exist with Spanish colonial edifices. So, with Robert’s building of the Iron City world we see these hybrid blends—including those cuartos de azotea that appeared atop colonial-era vecindades—that remind of how layers of time and space reverberate in and through the built spaces of the Américas.

Of course, Robert and his design team also want to transport us into the future—300 years in the future.So, they overlay this spatiotemporally layered architecture of the Américas with an industrial, steam-punk low-tech look; retrofitted tubes and exoskeletal wires remind us that we are in a future—but a future that continues to recall the wounds of the brutalities of colonization.

Robert and his crew stamp and sign-post (literally) Latinx culture all over Iron City. Street and shop signs are in Spanish (“Clinica” and “Ciggaros”, for instance). Food and drink are recognizably Latinx. Latinx rhythms fill Iron City’s airwaves; on a street corner we see and hear a Blatinx musician strumming multineck guitar. Braided chili and garlic ristras hang from eaves. Robert’s (and DP Bill Pope) camera-eye lingers over Hugo and Alita bonding while nibbling some chocolate; Robert wants us to soak up the scenes’ importance: the highlighting of xocolatl (Aztec)/ kawkaw/cacao (Mayan) to celebrate our pre-Columbian, indigenous way of life. Robert provides a similar pre-Colombian palimpsest with the bounty-hunter, McTeague (Jeff Fahey). When the camera first introduces McTeague in the cantina-styled bar, “Kansas”, he’s surrounded with a pack of cyborg dogs. Think: canine deity, Xolotl, the twin brother to Quetzalcoatl, and guardian of sun as it travels to the underworld every night. This same camera-eye lingers over Alita’s writing the number 99 on her shoulder. Not only is this an important moment when she writes on and claims her cybernetic body, but, given all of Robert’s deliberate Latinx signposting throughout the film, this act also resonates with the number 9 in Aztec and Mayan cosmologies: in the former, the underworld Mictlan consists of 9 levels and in the latter, there exists earth, with 4 spaces above and 4 below.

In Alita there’s a deliberate, deep infusion of Latinx culture in all its multilayered spatio-temporal

hemispheric reach. This continues even when the story briefly steps outside of Iron City. When Alita and her multiethnic crew (Hugo, Tanji, and Koyomi) leave the city, they pass through a giant wall—a wall that surrounds the city and that controls the flow of people in and out. Once outside of the city, Robert fills the landscape with an amalgam of tropical flora and Central Texas flora. They walk through rubber trees and cedar elms. It’s a deliberately reconstructed hybrid equatorial/north American flora used to further conveys the film’s placing us deliberately within a hemispheric Latinx sensibility. Robert builds this Latinx sci-fi world with Latinxs front and center. Indeed, with his casting of Latinx (Peruvian ancestry), Rosa Bianca Salazar he gave her a platform to embrace her Latinidad; up till this moment, Rosa’s Latinoness had gone unmarked and unremarked in and around films such as Bird Box and the Divergent and Maze Runner series. With the release of Alita, Rosa’s out and proud as Latina, giving special attention to her Quechua-speaking abuelita, for instance. Robert and his casting team’s choice to bring onboard Anglo/Latinx (Chilean/Mexican) actor Keean Johnson as Hugo along with Dominican-born Jorge Lendeborg Jr. as Tanji, and Michelle Rodriguez as Gelda (seen in flashback sequences) importantly builds out a cast of phenotypically varied Latinxs.

The heroes stand in sharp contrast the casting of white, male actors as the sociopathic villains: the British actor and rapper Ed Skrein as Zapan and a whiter-than-white Edward Norton as Nova. By reversing the Manichean silver-screen scripts (white/good vs. brown/bad), Robert vitally reframes expectation and engagement of sci-fi storyworlds.

With Robert’s films, we know that there’s always more happening than meets the eye. It’s certainly the case that he’s flipped the mainstream business-as-usual with sci-fi film stories. Latinxs are not the exotic and ornamental; they are not the helpless and hapless.  But there’s more that Robert does with Alita. He affirms. He empowers. He throws us existential conundrums.

This isn’t new for Robert. In all of his films he smuggles into the genres he uses (and abuses)—from Western and Mexploitation to Teen, Horror, Sci-Fi, even music videos—doppelgängers, existential crises, political critique, patriarchal corporatocracy, mestiza affirmation and empowerment, and much more. With Alita he smuggles into the mainstream imaginary the question of what makes us human in and around hybrid (Latinx) subjectivities that exist in a hemispheric Américas. He smuggles into the mainstream imaginary the deep affirmation of mestizo selves that resonates beyond the silver screen; they reverberate in our minds as allegories of the birth and rebirth of an empowered mestizas: it’s only once the body and mind meld that Alita comes to know her self—a warrior self informed by a 300-year-memory of her armed resistance to colonization. It would be remis of me not to mention a couple of nit-picks before I wrap up this thought piece on Robert’s Latinx sci-fi world building. As some have, I’m not going to take issue with Alita’s second rebirth into a full-bosomed cyborg body; there’s nothing about the costuming, lighting, or lensing that raise those fanboy wish-fulfillment sexual fantasy flags. I do think Robert, the screenplay, and his casting crew slip hard when it comes to Nurse Gerhard; and, not because of the choice to cast a woman of color (African American actor, Idara Victor) in the role. It’s that by having her play the role of a silent, ready-to-please appendage to the white scientist, Dr. Ido, the film takes us twenty steps back in terms of representational politics. And while we might argue that costuming of and pig-tail hair design for Vietnamese American Lana Condor as Koyomi is the film’s way of gesturing toward its manga source material, this stands-out like the fetishistic, orientalist sore thumb that it is.

Finally, and this is more of a personal preference, Robert has skillfully used 2D cinematographic storytelling to excellent use in most of his films; he knows well how to lens and light a shot to guide our brains to create dynamic depths of field. His use of 3D doesn’t work here. It doesn’t distract like yesteryear’s 3D. It’s just that its constant presence of 3 depth planes assign importance simultaneously to objects and characters in the foreground, middle-ground, and background. This overloads our perception system, unnecessarily.

Robert Rodriguez’s Alita might not be exactly the Latinx Wakanda we’ve been waiting for. It is, however, a world building that powerfully reminds us that we can make thrilling sci-fi stories that include Latinxs as more than just ornament. In an interview, Robert told me that with his films he wants to pull us into his “fever dreams” (139).  Alita is a fever-dream that proactively welcomes all—and Latinxs especially.

(Originally published at Latinxspaces on February 22, 2019)